The Rolling Stones SHINE A LIGHT

The Rolling Stones & Martin Scorsese on the Red Carpet for the premiere of SHINE A LIGHT, the new concert film released APRIL 4th, 2008. Here are my photos from their arrival at the Ziegfeld in NYC.
Read More 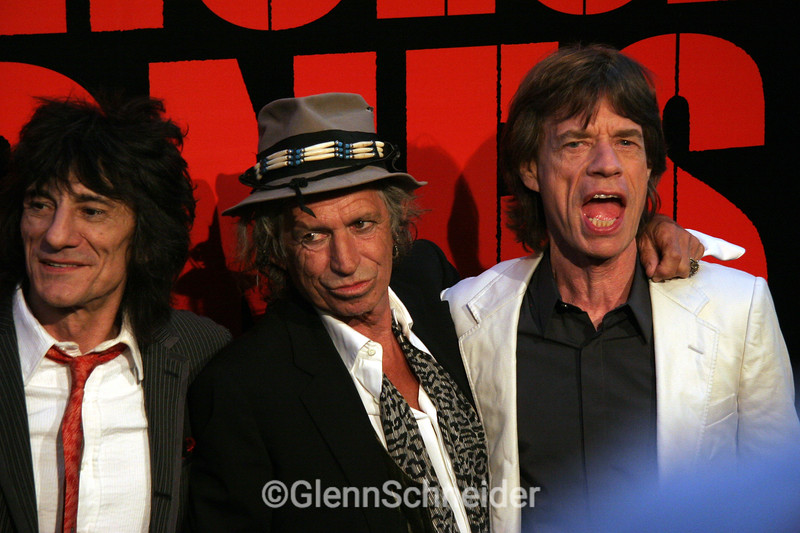 Here is my recap of my 2008 Rolling Stones experience:
GLENN & THE ROLLING STONES March 2008

This is a brief recap of my Rolling Stones experience last month, which actually had its start over a year ago. Let me explain:

In the fall of 2006, the Rolling Stones played two nights in the Beacon Theater in NYC. One night was a fundraiser/birthday party for Bill Clinton and both nights were to be filmed for Martin Scorcese’s “Shine A Light” Rolling Stones movie. I was lucky enough to score a ticket to both nights, with the help of my Stones fan friends.

Last summer, Aug 2007, I found the Shine A Light movie trailer on the internet & I was excited to see that it was a Paramount movie, since I often work press interviews for Paramount movies. I mentioned this to the woman who books me to keep it on her radar.

Around early March 2008, as the movie release date was approaching (April 4, 2008) I figured we were not going to get the interview job. I emailed my contact person reminding her that the movie was due soon. I wrote,: “I guess we’re not going to get to do the Stones job?”
She wrote back: “Glenn, don’t poop yourself, but we got it & you are on it!”
I couldn’t believe it! And I was very,VERY excited.

Rumors were already being posted on the internet of where it was, and how my fanatic friends were scheming to get in or just hang out in the area. I had the golden job! I was going to get paid to do something I would normally offer to pay for! How awesome is this!

I was nervous that the day would be canceled or the day would never come. I didn’t tell too many people about it until a day or 2 before it was going to happen. By then, I was bursting at the seams with excitement.

Press conference
I arrived early for my 10AM call for the press conference. A small crew was building the foam core backdrop in a large room on the 4th floor at the Palace Hotel in Manhattan. Soon we loaded in all the gear and setup. I was one of the 3 camera operators for the satellite feed. It was very exciting to be at the press conference, to see the band close up. Plus I knew how many fan friends were dying to be here & I was in and I was getting paid!

The press conference had Mick, Keith, Ronnie, Charlie & Martin Scorsese answering questions for a room of about 200. There was a bunch of press video cameras in the back. I was part of a 3 camera crew, taping the event which would later be the satellite feed. I was the side camera getting a 2 shot. The Stones were in & out quite fast, less than 30 minutes. It was very cool, but way too quick. I was still buzzing with excitement with the wrap and thinking about the Red Carpet event that was happening in a few hours. When the set crew was breaking down the foam core background, I asked if I could have it. It was already cut up, but still it would be awesome to have. It was very heavy, but I carried it to my car, parked on a NYC street a few blocks away. It is 9 feet X 18 feet !!!

The Red carpet
At the Zeigfeld Theater, the Shine A Light movie was premiering and the Stones were going to attend. It was actually a black carpet under a huge tent, with tons of press coverage. It was crowded kaos. The still photographers were lined up shoulder to shoulder for about 100 feet, and then there was the video/TV section. Behind the photographers, was another line of photographers on step stools.

Many celebs were attending, but some were slipping by behind us, not wanting to be noticed, like Val Kilmer. I noticed Lisa Fischer, the Stones backup singer. I said hello, shook her hand, and told her she should be on the other side! She agreed & turned around. She then hung out with the other backup crew and greeted the Stones as they arrived. I also saw Albert Maysles. He was also on the wrong side. I said hi & told him to go around to the red Carpet. His guest was my friend Michelle. She agreed & walked with Albert on the Red Carpet. Albert worked on some of the behind the scenes video for this movie & he was director of the 1969 Gimme Shelter movie.
After the red carpet, I went out to dinner with my friends that were across the street. (Lynn, Gail, Bob & L’ren)

Palace Hotel interviews
Now the next day, Monday, and this day was even better! We were working on interviews with the band for E!, Extra, Access Hollywood & CBS Morning News. Mick was in one room, Ronnie & Charlie side by side in one room, & Keith in another. I requested Keith’s room and got it! Each of the 4 interviews were about 7 minutes long. I was excited and nervous. I had a few secs to talk to him between interviews, telling him that I was at both of these Beacon shows, what a big fan I was, showing him my tat. His reply was “ Oh, so you’re hooked”
He was very pleasant, funny, and unique in his normal keith way, coming up with answers only he could drum up.

We began our wrap, but the band was still doing radio interviews in different rooms on the same floor. Ronnie walked right by me in the hall, passing the room he was supposed to go in, and they asked me where the room they were supposed to go in was located. I was kind of speechless, and just pointed to the door, 2 doors down. I saw Mick jump on the elevator with his security guy. We had to stop working, (pushing cases) for Mick to get by to the elevator.

It was a surreal experience for such a super STONES fan, like myself. These are two days I will never forget,
It only compares to the day I worked with Mick doing interviews in 2004 for the Alfie movie. (that is the only reason I did not request Mick’s room, since I had worked with him previously). And I am sure you have seen the wide-eyed photo of me from that exciting day.

I have since seen the movie twice in IMAX. It is a great concert movie, much different than their past concert DVD releases. This one makes you feel like you are actually there. And the audio mix is fantastic. I highly recommend seeing it, and if you miss it in the theaters, it will be out on DVD September 23rd, 2008.